Happy New Year! Sarah Helm's monthly film blog considers some rather quirky resolutions and the role of AI and robots on the Silver Screen...

Here’s hoping that your 2023 is off to a great start, that your horizons are bright, your hearts are full of hope and that you have a ‘go bag’ with you at all times, to combat all the different weather conditions that we’ve been experiencing lately.

Perhaps humanity’s urge to better itself has caught your imagination, and you have embarked on making and maintaining a set of New Year resolutions.

Maybe you’re finally going to get in shape after Christmas (those mini Mars bars aren’t going to eat themselves – literally. No one in our house will touch them), and you’ve set your goal to run up the steps to the White Hill Centre à la Rocky (1976), shouting ‘Am-Er-Sham!’ when you get to the top, before remembering it’s the next town across. 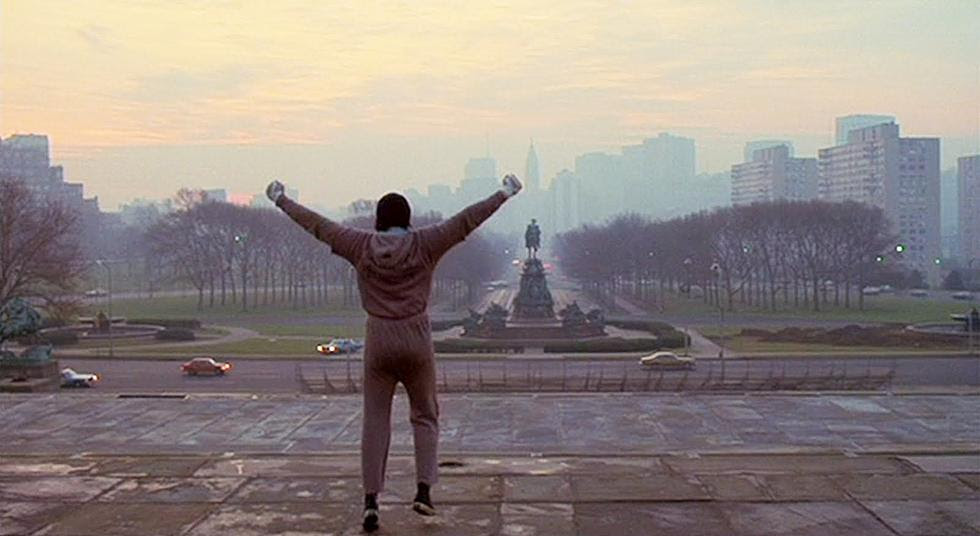 Maybe you’re going to change career and can fill one of the many vacancies that’s blown a void into our economy’s space/time continuum over recent years.  No time like the present, so fire up your device, stumble to the kitchen, pour yourself a cup of ambition.

We at CFS and The Elgiva, of course, wish you luck with your endeavours, but there is only so much that we can do…

However, if your resolutions involve language learning, art house cinema and new romantic encounters, then my friends, you have come to the right place.  On Wednesday 11th January, 2023, the first CFS screening of the new year will be German sci-fi romance, I’m Your Man (2021). 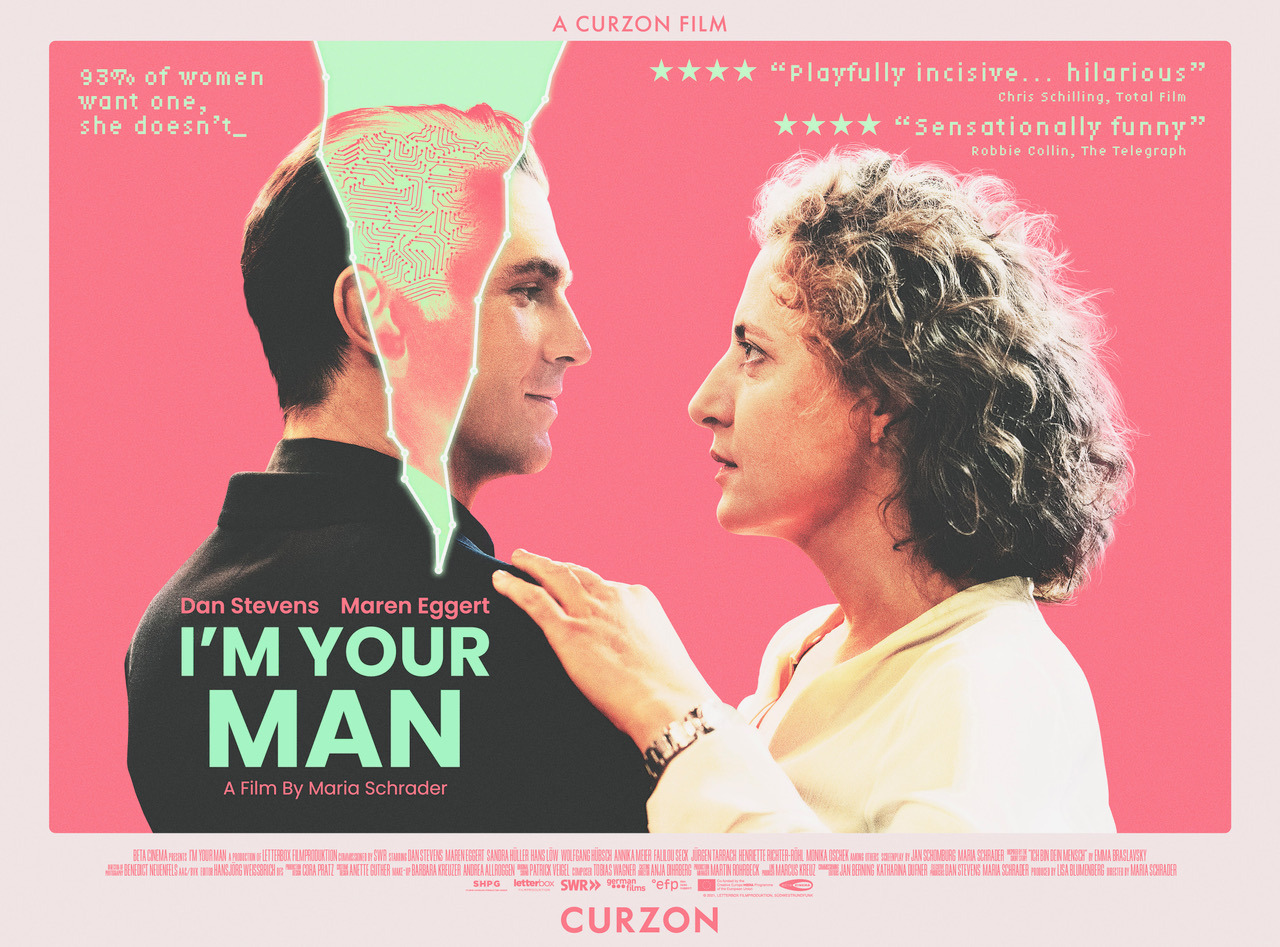 I’m Your Man tells the story of Alma (Marran Eggert), a museum employee who meets and then agrees to date Tom (Dan Stevens), a robot designed to fulfil the role of her ideal partner.  Alma must evaluate the experiment for three weeks for an ethics committee, who are researching whether robots should be given human rights. In return, Alma’s department will receive funding for their research trip to Chicago.

Soon, the initial glitz of romantic dinners and rose petal bubble baths turns into something more emotionally complex, and lines start becoming blurred, with the film’s narrative examining desire, loneliness and what it means for a person to be truly emotionally fulfilled.

Directed by Maria Schrader, who co-wrote the screenplay with Jan Schomburg, I’m Your Man is a thinking person’s rom-com, which received favourable reviews from critics upon its release, was Germany’s entry for Best Foreign Language the 94th Academy Awards and won prizes at the Berlin International Film Festival, Festival of German Film and German Film Awards.

Dan Stevens, who plays Tom in the film, and is fluent in both German and French, rose to prominence on British screens as the dashing Matthew Crawley in Downton Abbey. Afraid of being typecast, Stevens left the popular series after three seasons, much to the outrage of his devoted fans. His final scenes were aired in the Christmas episode (giving EastEnders a run for its money on the misery stakes), involved the arrival of Matthew and Lady Mary’s baby son, and went along the lines of:

“I’ve got a new baby son and a beautiful wife. I couldn’t be happier, darling. I love you both so much.  Now, please excuse me while I take my rickety old sports car out onto a hazardous country lane.  I do hope I don’t run into any trucks careering dangerously from the other direction…’.

Still, they all scrubbed up nicely for the funeral.

Since leaving the series, Stevens has taken successful risks in the parts he has chosen, not wanting to just play the handsome romantic lead.  Notable films have included The Guest (2014), Beauty and the Beast (2017) and Eurovision Song Contest: The Story of Fire Saga (2020).  He also starred in the Broadway production of The Heiress (2012), based on the novel Washington Square by Henry James.  I mention this as I was in New York with my mum when this was on, during Hurricane Sandy (our plane arrived an hour ahead of schedule). I had studied Washington Square for A level and didn’t want to revisit the story. We opted instead for The Performers, a satire about the Adult Film Awards starring Henry Winkler and Alicia Silverstone.  As much as I loved The Fonz, it was not the best decision I ever made. The Heiress had a successful run from November 2012 until February 2013. The Performers closed after six shows… Happy Days? 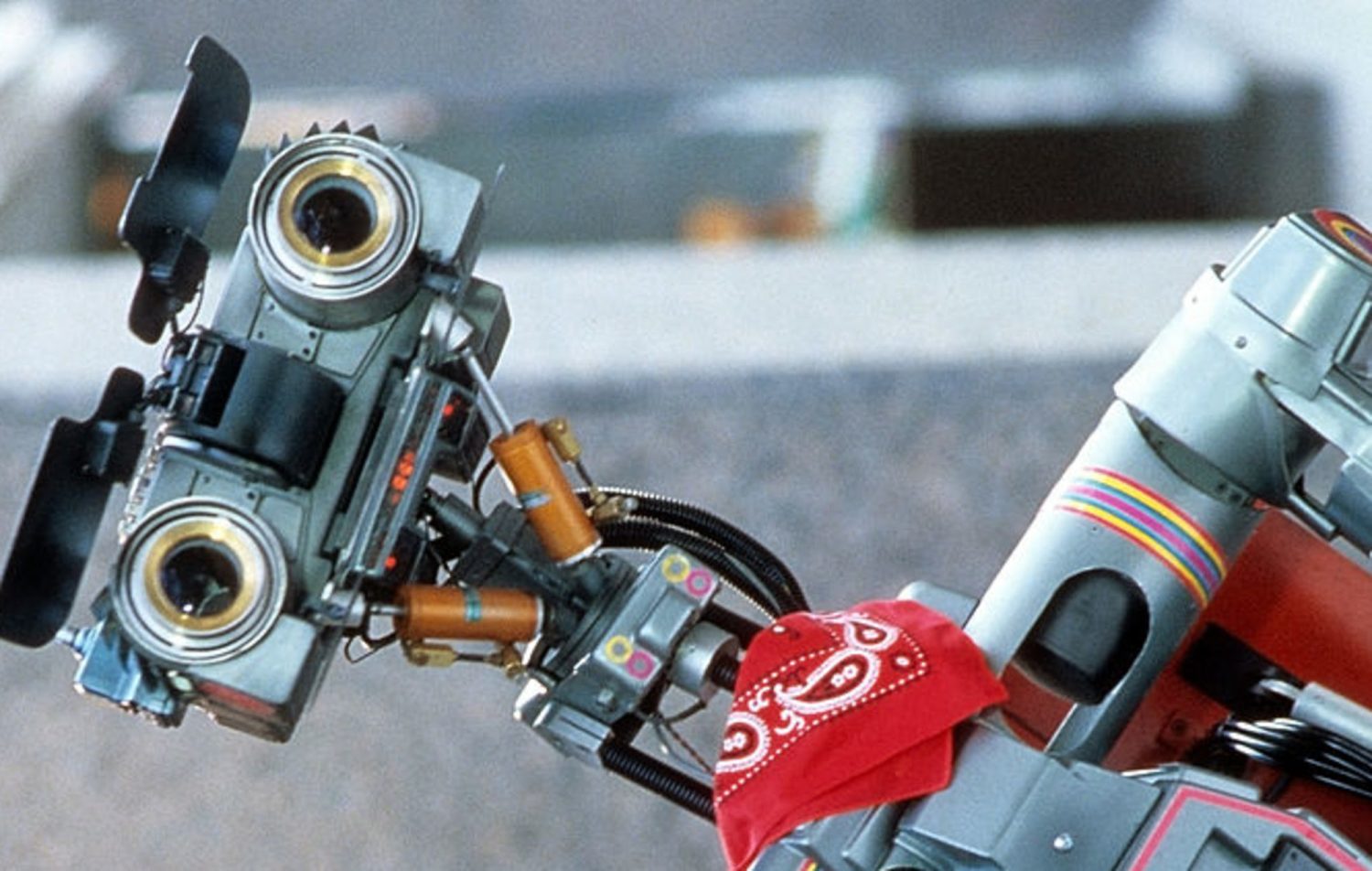 Rage against the machines…

Unlike Johnny 5 in Short Circuit (1986), or the eponymous Wall-E (2008 – although he was alone on a waste-covered Earth and couldn’t do much more damage than the people had already done), robots and computers in films are usually portrayed as sinister and suspicious, plotting to overthrow the human race and becoming more powerful than those who created them.

Otherwise, the focus is more on the salacious side, with humans and those blessed with Artificial Intelligence (AI), getting on rather famously, usually more famously than initially intended. I won’t go into the details here, because a) this is a wholesome family blog, and b) I don’t want to be put on any sort of watch list (with watch being the operative word, ‘You like to watch, don’t you…?’) 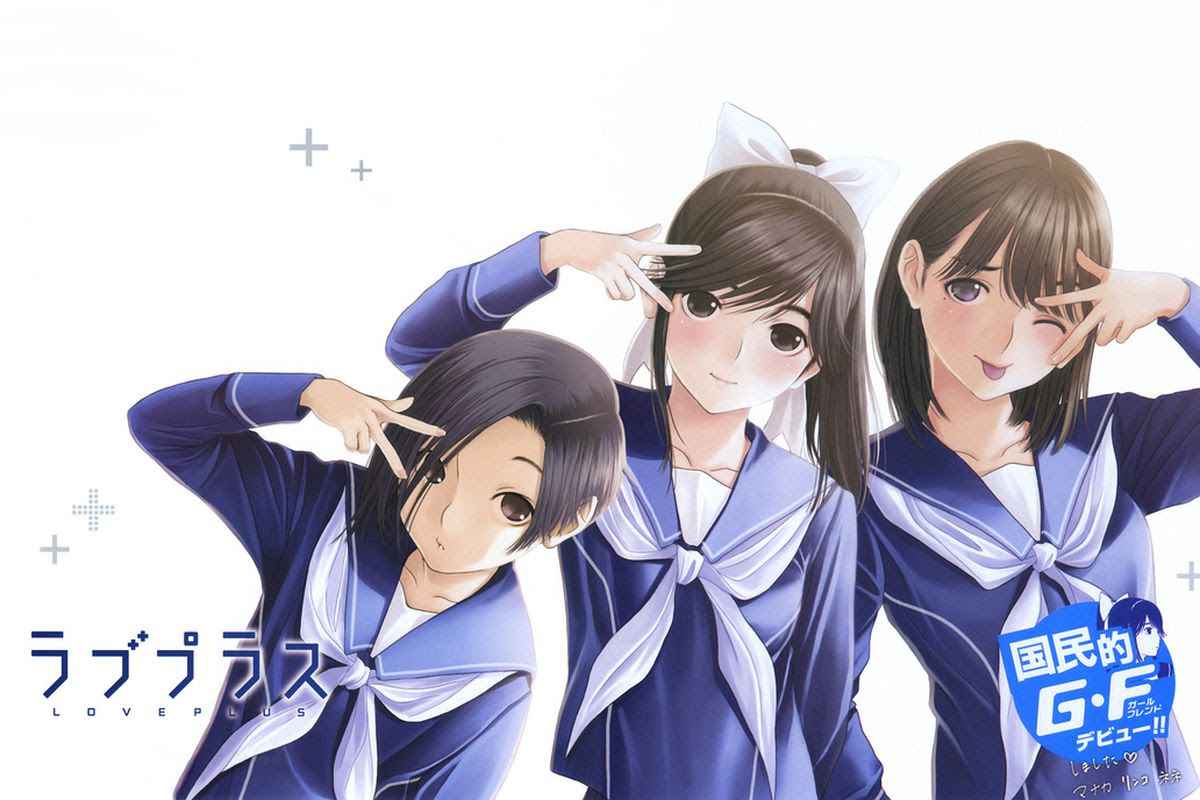 Although the game Love Plus on the Nintendo DS became very popular with a certain type of shy introvert, where the gamer could woo and then date a simulation of a girl through an app on (usually) his phone, (involving long conversations, trips to cafes, taking her for rides in a bike basket, not having to deal with any inconvenient backchat or intellectual opinions, living literally in his pocket), a quick internet search doesn’t come up with much in the way of light hearted robot/human romantic encounters on the big screen, although there is a plethora of Korean TV programmes that seem to be dedicated to just that.

Algorithm, I got music…

The robot romantic comedy (rob-rom-com? Is that a step too far? Or is it already a niche for 80s Robert Downey Jr films? If he was cast as a robot would it be rob-rob-rom-com? Or Julia Roberts and Robert Downey Jr both playing bots? They could be Robots Downey Julia…That’s actually one of my best…) is a sub genre with few notable entries:

Electric Dreams (1984) – a bizarre tale of a love triangle between a man, his neighbour and a personal computer named Edgar (yes, really). But it did give us the 80s classic by Giorgio Moroder and The Human League’s Phil Oakey (sister called Carrie??? Ho ho…)

Weird Science (1985) – two unpopular High School geeks (probably now Silicon Valley billionaires) conjure up Kelly LeBrock via a computer programme, with ‘hilarious’ results, and ample cleavage.  (The eagle-eyed amongst you will note that this is indeed the third reference to Anthony Michael Hall in as many issues.  Expect the 150-word retrospective imminently…)

Making Mr Right (1987) – an eccentric PR executive (Ann Magnuson) is hired to educate a robot (John Malkovich) in human behaviour conventions, but instead, they find themselves falling in love.  (I remember this from the 90s, when Channel 4 used to show films on a Sunday night.  I’d never seen it before or heard of it since.  It’s was very strange to feel that you were the only one watching something, when there were only four channels…)

her (2013) – Joaquin Phoenix, complete with motor-racer moustache, falls in love with virtual assistant Samantha, who just happens to look exactly like Scarlett Johansson.  As this is a Spike Jonze film, most of the protagonist’s friends view this as perfectly normal. 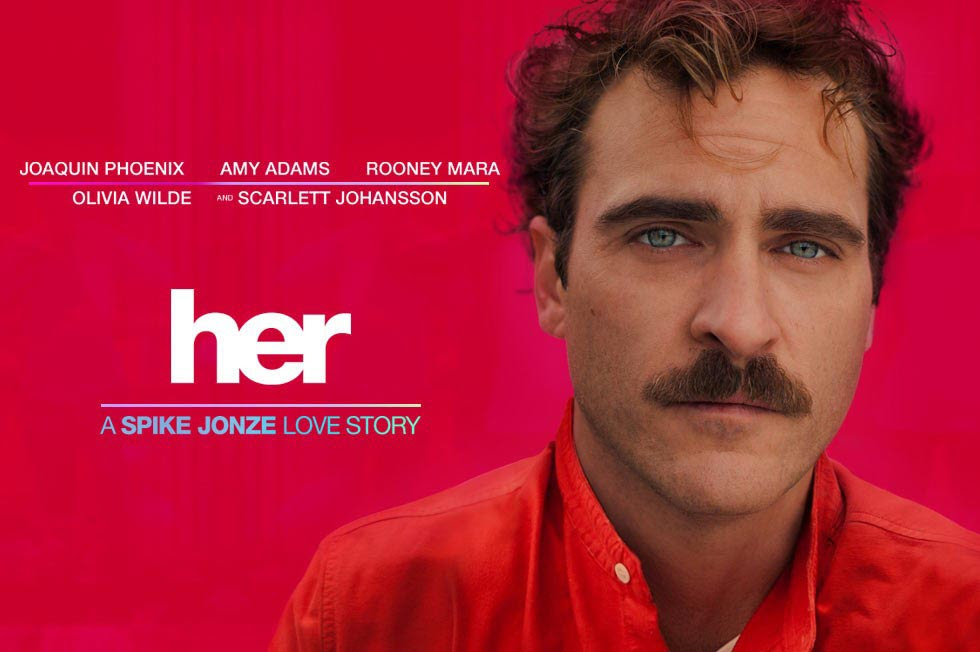 So, we may have taken a long hard stare into the abyss of the future of human relationships, but let’s not forget, it will shortly be Valentine’s Day, so maybe this article will inspire those singletons among you to pluck up the courage and take the toaster on a date to the nearest Toby Carvery.

Whatever your thoughts, we hope you enjoy I’m Your Man.  May it give you food for thought and inspiration to download Wham!’s back catalogue.

Let us know what you think. Or not. It doesn’t matter – we already know… we’re watching… 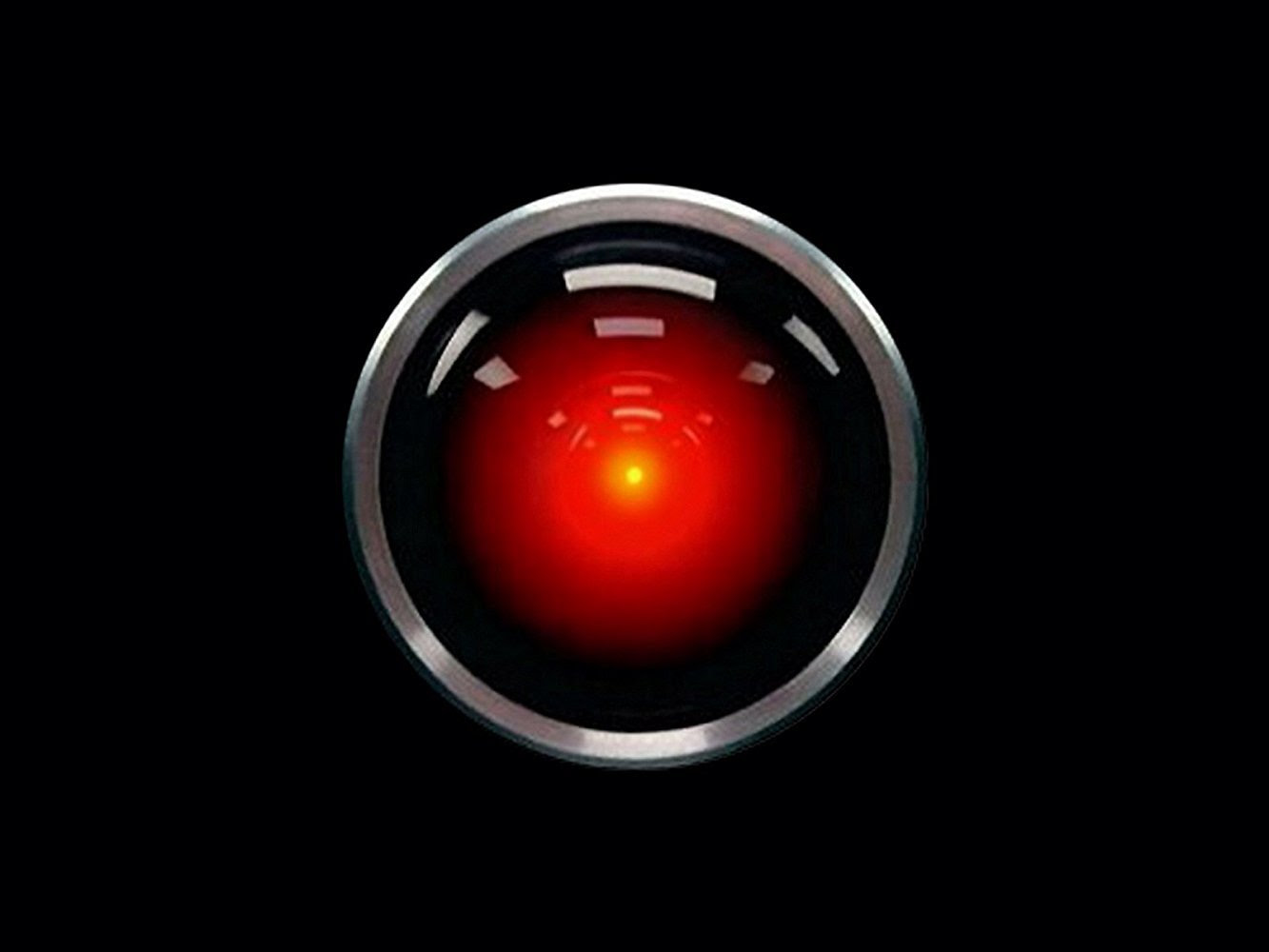 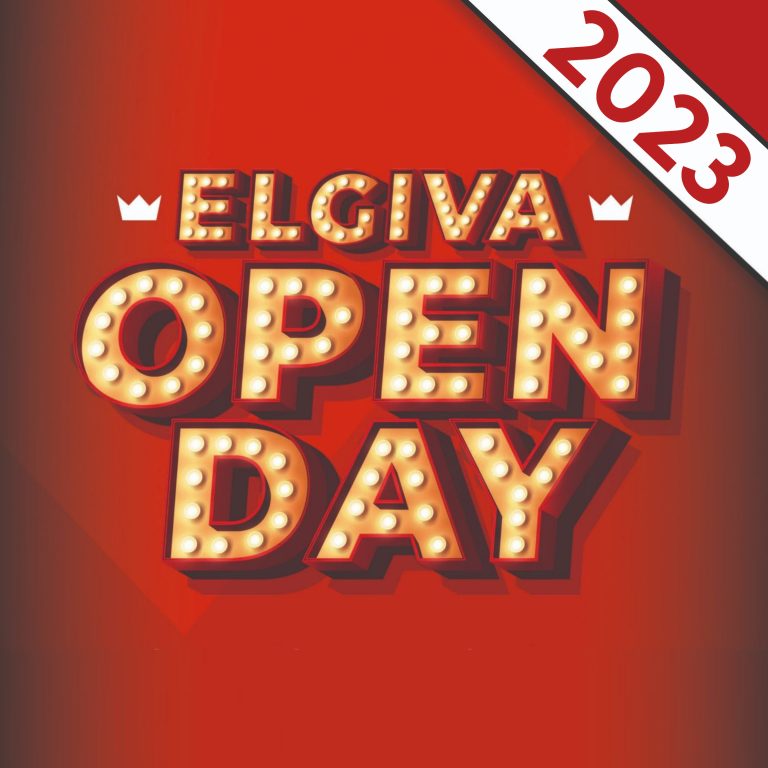 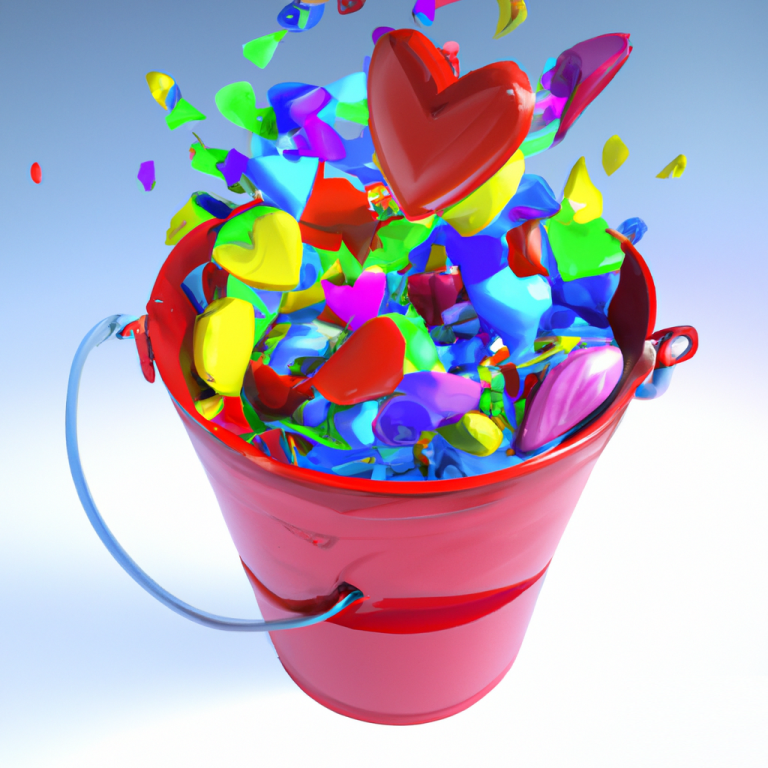 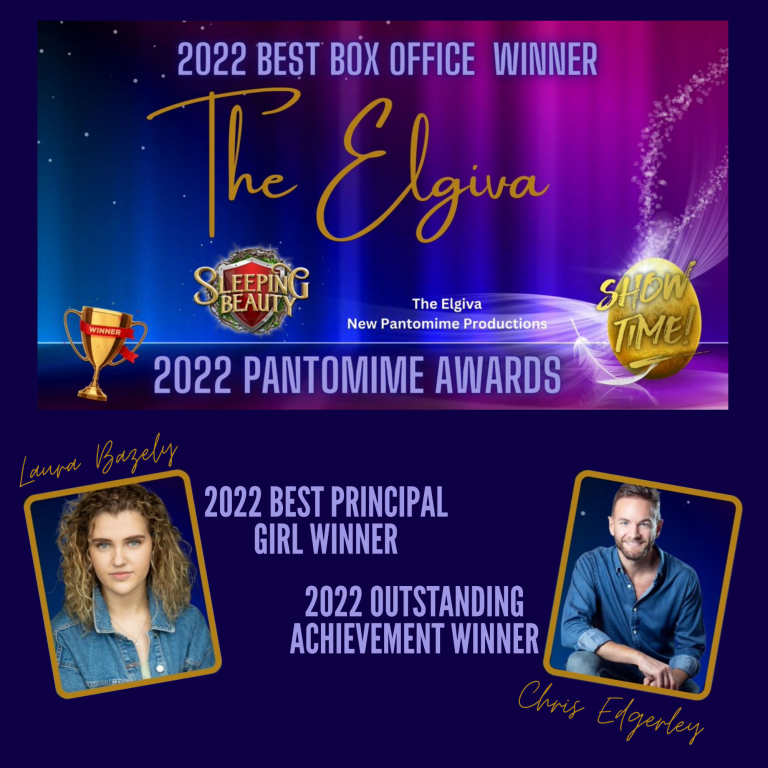 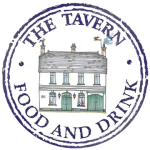 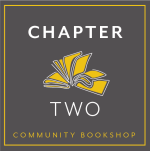