It is a truth, universally acknowledged, that living in the fine town of Chesham comes with the caveat that no one outside the vicinity has ever heard of it. At best, people will vaguely nod when offered Amersham as a geographical alternative, confuse it with the old HQ of Tesco (Cheshunt) or wince an exclamation that they didn’t realise that the Metropolitan Line reached out as far as Zone 9. Oh, what price to pay for (semi) affordable housing.

But all this is set to change. Our friendly, quirky town with a bustling market and thriving cultural hub is about to set the Chilterns ablaze (metaphorically – we don’t want to be on the map for the wrong reasons) with the On Location Film Festival! 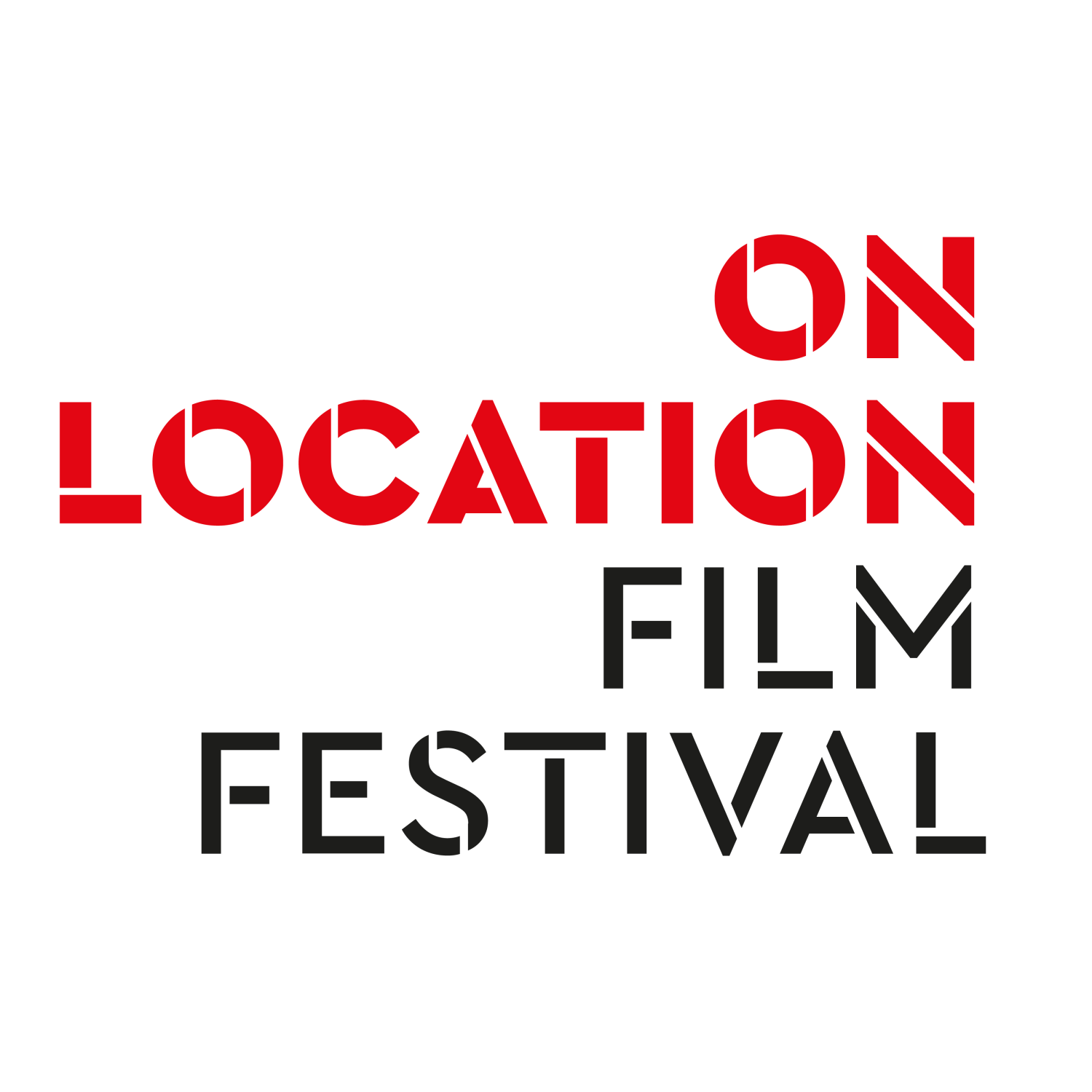 New for this year, but with an eye to make it an annual event, the festival is taking place over the next few weeks, screening movies and cinema-related activities at various locations throughout the Chilterns.

The festival boasts a packed schedule which caters for all tastes with an eclectic range of screenings, quizzes and workshops.  More information can be found HERE.

Here are a few items from the itinerary:

Opening on Wednesday 12th October, as part of the CFS schedule, The Elgiva is screening Escape from Mogadishu (2021), an action adventure set during the Somali Civil War in 1991. Based on real life events, the story tells of how staff at both the North and South Korean Embassies have to band together to flee the country, during the outbreak of war following a political coup. Directed by Ryoo Seung-wan, Escape from Mogadishu was South Korea’s entry for the Best International Feature at the 94th Academy Awards, and is particularly notable for its nail-biting third act (no more spoilers!).

Friday 14th October sees The Good Earth Gallery in Chesham screening a Laurel and Hardy double bill, Saps at Sea (1940) and The Music Box (1932), for those hankering for some golden age of Hollywood comedy.

The price of the ticket includes a free drink, just don’t be tempted to look at your watch if your glass is being held in the same hand. That would indeed be a fine mess…(go on, which one of you know-it-alls is going to tell me that they never actually said that…). 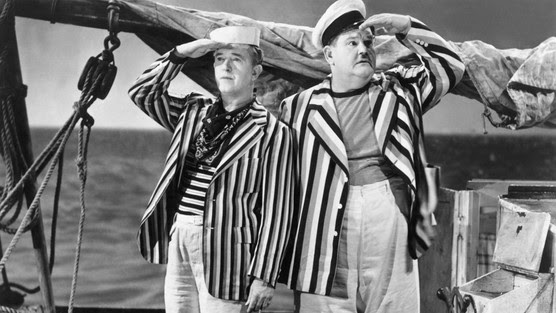 Those wishing for an early Halloween might want to visit The Full Moon pub in Hawridge on Saturday 15th where they will be screening the comedy horror classic, An American Werewolf in London (1981). With its traditional low beamed ceilings, well stocked bar and rural setting, The Full Moon is a fitting tribute to The Slaughtered Lamb hostelry (how much did that sheep drink??), that features in a pivotal scene. If you’ve ever wanted to sit at a bar, turn around slowly at an opening door, stating, in a considered manner that: ‘You ain’t from around here, are you boy?’, then this evening is for you. Tumbleweeds will sadly not be available on the night, although the allotments at both Cameron and Asheridge Road may have a supply – it was an exceptionally hot summer…

The film is the story of a hapless tourist, David Kessler, who experiences a terrifying attack on the Yorkshire Moors whilst walking one lonely moonlit night with his friend, Jack. (In all fairness, they can’t say that they weren’t warned). David wakes up in a London hospital, three weeks later, having been assisted back to health by nurse Alex Price. However, he soon finds he is living out the gory consequences of his ordeal – in the nation’s capital.

The film stars David Naughton, Griffin Dunne and Jenny Agutter and has become a cult horror classic, notably for the transformation scene, which was completed without the aid of CGI. Rick Baker won the first ever Oscar for Make Up for his stunning visuals in the film, making him the leader in this field. His work can also be seen in Michael Jackson’s Thriller video (1983 – also John Landis), and Men in Black (1998), among many other titles.

Director John Landis is something of a controversial figure, having been implicated, but later acquitted, of involuntary manslaughter of three people whilst filming a helicopter stunt on the set of The Twilight Zone: The Movie (1982). The tragedy ended Landis’ friendship with Steven Spielberg, who co-produced the film, but did not terminate his career. An example perhaps of how Hollywood operated in different, less enlightened times.

At the time of filming, American Werewolf was the only movie for 15 years which was permitted to be shot in Piccadilly Circus. The two-night permit was granted after Landis invited 300 Metropolitan Police Officers to watch his new film, The Blues Brothers (1980). They didn’t have to ‘Think’ too hard about granting permission.

The film is something of a historic document, featuring Leicester Square and Soho before the West End’s clean-up, and shots of Trafalgar Square, London Zoo and the Underground when everything was a bit grimier and pedestrian access a mere dream.

The fictional ‘See You Next Wednesday’, features in the adult cinema where David and Jack are reunited. This is a running gag, as the phrase features in many of Landis’ works, either displayed or uttered during the course of the action. 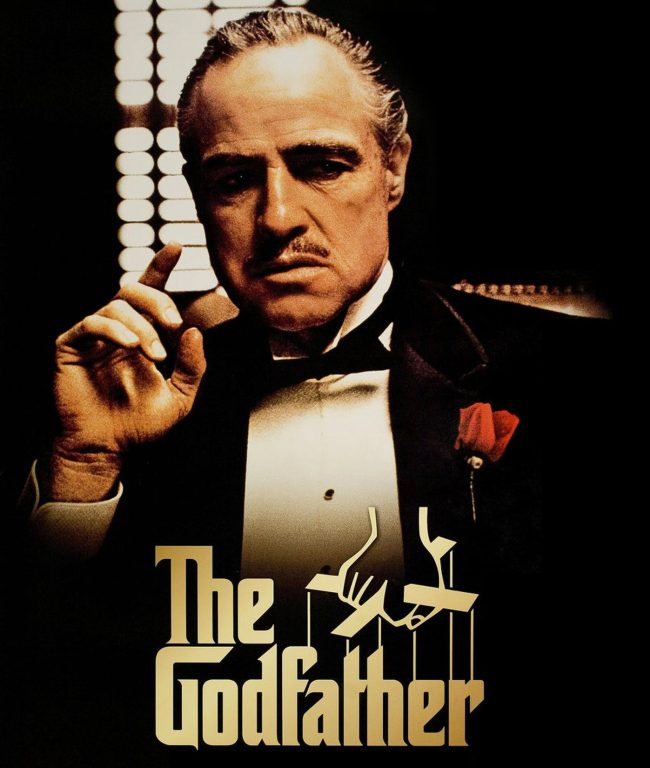 Should your penchant for nefarious figures creeping around in the shadows possess more of a real life vibe, then look no further than the screening of Francis Ford Coppola’s The Godfather (1972) at the Amersham Fish Bar on Tuesday 18th October. (Spot the connection, I dare you…Puns not your thing?  Sorry. It’s not personal, it’s strictly business). The Oscar winning classic, based on Mario Puzo’s best selling novel of the Corleone crime dynasty, stars Marlon Brando, Al Pacino, James Caan and Diane Keaton.

Price of admission includes a fish and chip supper and the opportunity to view the film in a unique venue. Now, that sounds like an offer…(please don’t make me write this…) that you (sigh) can’t refuse… 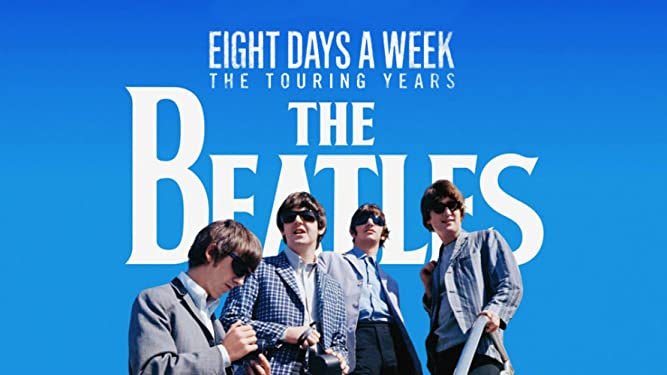 Why not work off those fish and chips with a bit of a bop? On Wednesday 19th October, The Elgiva will screen The Beatles: Eight Days A Week – The Touring Years (2016).

Ron Howard’s film documents The Fab Four’s meteoric journey from Liverpool’s Cavern Club to New York’s Shea Stadium, where they literally couldn’t hear themselves sing because of the screaming fans. The film incorporates interviews and archive footage of John, Paul, George and Ringo, as well as accounts from audience members at the time, including Sigourney Weaver and Whoopi Goldberg. It’s a delightful watch, much shorter and more succinct than Peter Jackson’s The Beatles: Get Back (2021), and acts as both a starting point for people new to the band, and food for the soul for well-versed fans.

After the screening, The Dung Beatles will entertain the crowds with the Fab Four’s back catalogue, so ‘Help’ yourselves and book tickets before they sell out, or ‘Twist and Shout’ because once they’re gone, they’re gone.

The Beatles themselves achieved cinematic success with A Hard Day’s Night (1964) and Help! (1965), before embarking on more experimental offerings of Magical Mystery Tour (1967) and the animation Yellow Submarine (1968), in which they had cameos.

Away from the band, George Harrison co-founded the production company, Handmade Films, in 1978, which had various degrees of success and was responsible for bringing Monty Python’s Life of Brian (1979), The Long Good Friday (1980) and Withnail and I (1987) into existence.

Paul McCartney’s passion project Give My Regards To Broad Street (1984), failed to ignite the box office, but did provide the world with a critically and commercially successful soundtrack, featuring ‘We All Stand Together’. ‘No More Lonely Nights’, Paul? That really depends if there was anyone else in the audience.

A more subversive take on things can be seen in The Rutles: All You Need Is Cash (1978), but for the ultimate mockumentary, which goes up to 11, look no further than Marty DiBergi’s This Is Spinal Tap (1984) – Rob Reiner, we salute you. 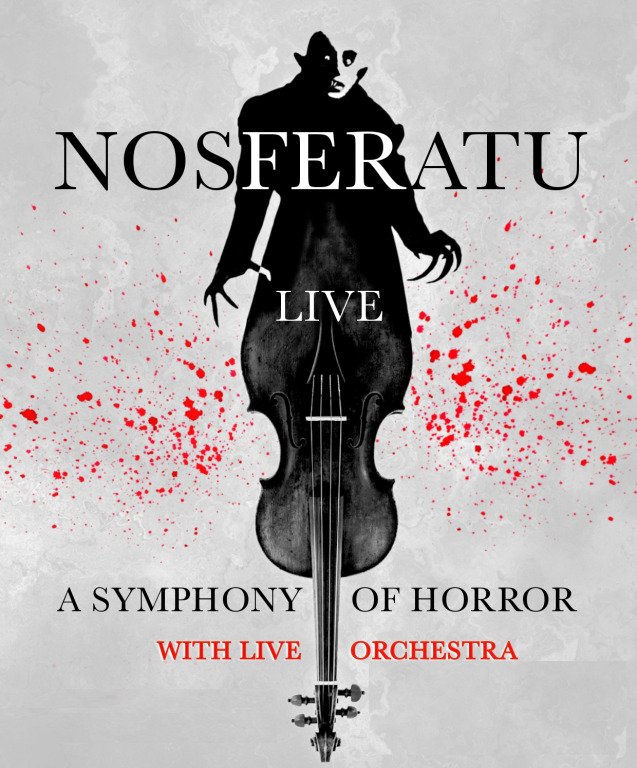 Perhaps the highlight of the festival is on Saturday 22nd October. Any peace you may have enjoyed will be shredded by the screening of Nosferatu: A Symphony of Horror (1922), at Dundridge Manor Barn, St Leonards, Tring. (Book tickets at your peril, brave mortal! Bwarhaahhhahhhahaaaaa!)

Originally a low-budget silent picture, intended for a German audience, Nosferatu is now viewed as a seminal work for the horror genre, with its iconography emblazoned and referenced in popular culture. The film is a thinly veiled, unofficial version of Dracula. Despite having names and locations and the ending changed, this did not deter the Stoker estate from suing the filmmakers over copyright infringement.

Since its initial release, Nosferatu has seen several incarnations, with tinting and various soundtracks being added to the original document. The scoreless version became available in the public domain in 2019, and the On Location Film Festival is honoured to be hosting the world première of a new score for the movie, composed and played live during the screening by local orchestra Echor Music.

So, there you have it. A whistle stop tour of a few of the many gems on offer at the On Location Film Festival. More information and tickets can be found at HERE, and we hope that you will find something on offer to both enthrall and entertain.

Cheers to Chesham and the Chilterns, and we’ll see you at the movies! 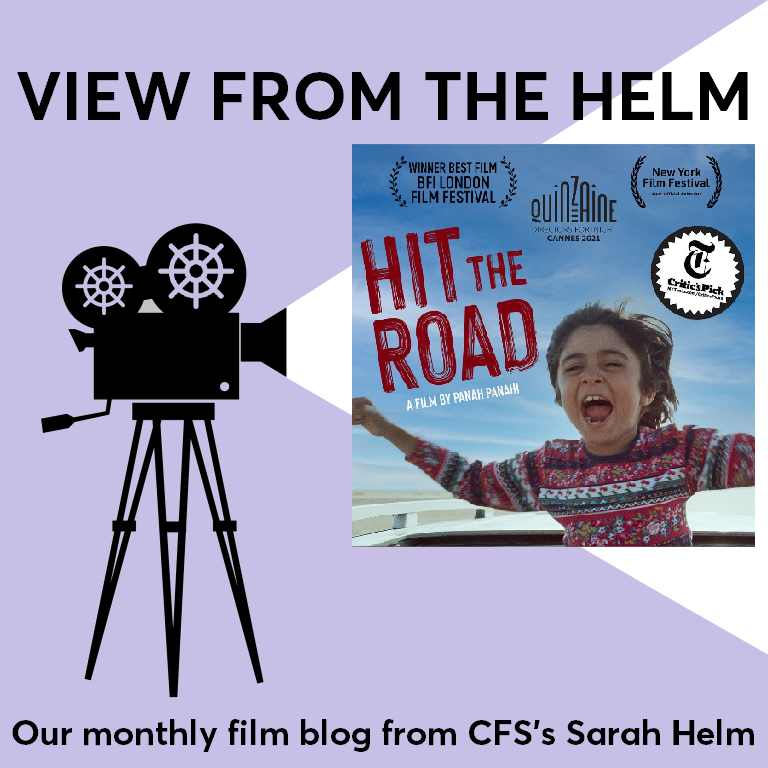 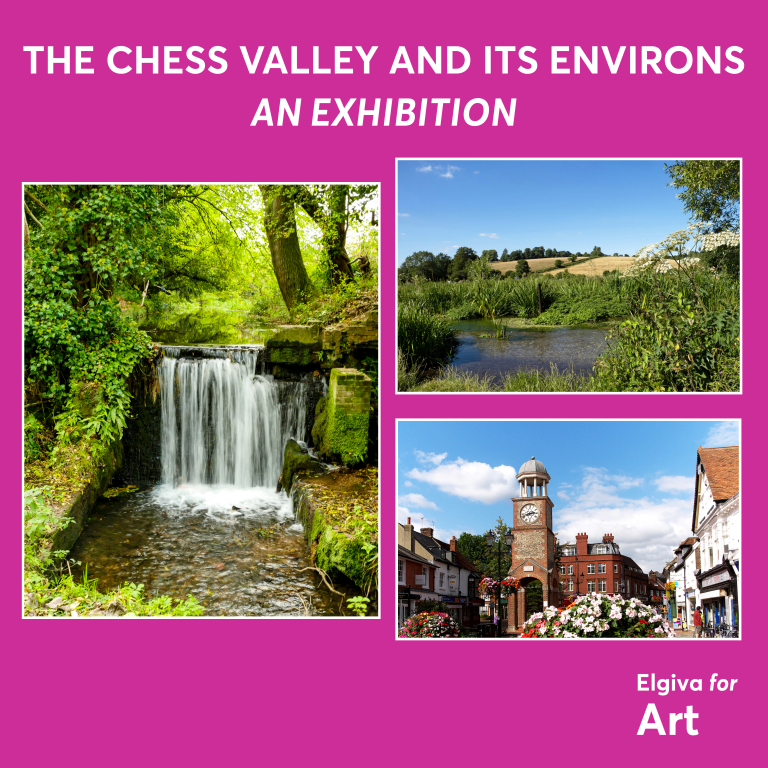